.We jumped down from the bridge into the concreted drain that ran through the park. At this stage, we were still above ground, and the sides of the waterway were coated with colourful street art. It was a hot day, and the coolness and seclusion of the tunnel was welcomed.

As we walked through the tunnel, it became evident that it had been frequently used by graffiti artists and by many explorers before. We walked for what seemed like kilometres into the bowels of the earth. At some points, trickles of water or light seeped into the tunnel. Most of the time, though, without the artificial light of the torches, we were in complete darkness.

At one point, the tunnel twisted around a corner and opened up a little. Our leader shone his torch upwards and we could see wooden floorboards above. There were also pipes and electrical wires visible. It sounded as if someone were walking above. He explained to us that we were underneath a shop on Glenferrie road in Hawthorn.[1] The people above were oblivious to our presence and continued to shop, blissfully unaware. I wondered what would happen to the shop if there were ever a flood in the tunnel. I didn't imagine it could have ever happened since the tunnel was built.

A bit further into the tunnel was a well-lit area, where beams of light seemed blinding after the dim yellow lumen of 20 torches. At this point, our guide stopped to show us the graffiti on the wall. This graffiti was not of the colourful kind, but a list of names. Every time there was an expo here, the leader would inscribe the names of the participants on the wall. Our pseudonyms were given, and the dark walls made us famous.

Before we left our play space, and returned to "ordinary life", we were each given a small slip of paper. On this paper was a secret password, which would allow us entry into an online world of urbex. It seemed we had all passed the test in the eyes of our hosts, and deserved to be elevated to the next level, which meant we would be privy to other underground adventures.

Urban exploration, often shortened to "urbex", is an activity which involves seeking out disused or underutilised parts of the city. These areas include condemned houses, factories, institutional buildings such as hospitals and asylums; rooftops, drains, under bridges, and vacant lots. There is a certain thrill in entering a site unpermitted. Some criminologists, such as Mike Presdee,[2] suggest that the illegality of the act is what makes it thrilling. In my experience, the excitement is derived from a spirit of exploration. In an urban setting, our pathways are usually set for us. Human bodies are channelled through the passageways of the city in predictable ways. Those keeping within the laws of the street, both written and unwritten, go unnoticed. It is as much the unwritten forms of governance that regulate behaviour in the city as the written.[3] Stepping outside of these norms exposes one to a scrutiny that most find uncomfortable, but others find exciting.

Many of Melbourne's secrets lie hidden beneath, in a stormwater drain, or behind a closed door in an alleyway. Those familiar with the city discover new entry points, and share them with others in person and online. Historic sites are particularly desirable. They enliven the imagination bringing forth images of layers of past human experience. Exploration of the city is a game without an object. Like a chose-your-own-adventure book,[4] the narrative is set by a combination of discoveries and your own imagination.

Academic (and explorer) Tim Edensor discusses urban exploration as part of his study on the aesthetic of urban ruins. He sees urban exploration as an organised form of "non-spectacular tourism".[5] He writes: "...urban exploration is akin to the expansion of adventure sports which seek out thrills and 'peak' experiences at variance to an over-regulated and usually quiescent life. [Urban explorers] enter... often forbidden zones, usually at night, frequently with the aim of exploring the least accessible parts of the complex."[6] 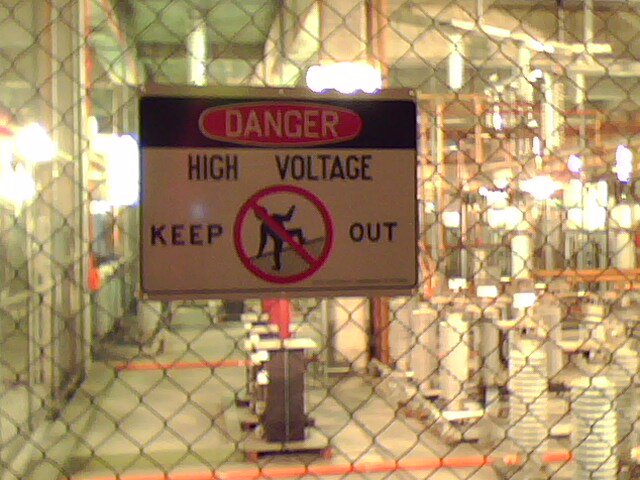 "The Promise of the Unexpected"

Much of the appeal of disused warehouses, drains or "ruins"[7] to urban explorers are their disruption to the clean, ordered spaces of the postmodern city. However, to urban explorers, these sites are "fecund" and contain a "promise of the unexpected."[8] Warehouses and factories in particular, once highly codified spaces, become their antithesis, as the flows of production slow and cease, leaving glimpses of nature to take root in its cracks. Prior and Cusack assert that: "Along with other spaces on the margins of regulated space, urban ruins operate as points of transition...amp;portals revealing the magic that exists at the interstices of ordered space."[9]

"...ruined space is ripe with transgressive and transcendent possibilities. Ruins offer space in which the interpretation and practice of the city becomes liberated from the everyday constraints which determine what should be done and where, and which encode the city with meanings. Accordingly, they offer opportunities for challenging and deconstructing the imprint of power on the city."[10]

By entering and utilising the spaces of the abandoned warehouse, urban explorers disrupt the notion that these spaces are "useless" once their capitalist-use has ended.[11]

Ninjalicious describes Urban Exploration as an activity that breaks the mould of ordinary experiences of the city, and allows practitioners to find a "new" world.[12] For Ninjalicious, the practice of urbex is a way of seeing layers of the city which are invisible to most of its inhabitants. "For too many people, urban living consists of mindless travel between work, shopping and home, oblivious to the countless wonders that the city offers."[13] For Ninjalicious, urban exploration is an awakening of the senses which have been "dulled" by the "cacophony of noise and meaningless spectacle" of the city. It affords its practitioners the opportunity to devise their own path, rather than be "corralled through the maze of velvet ropes on the way out through the gift shop."[14] 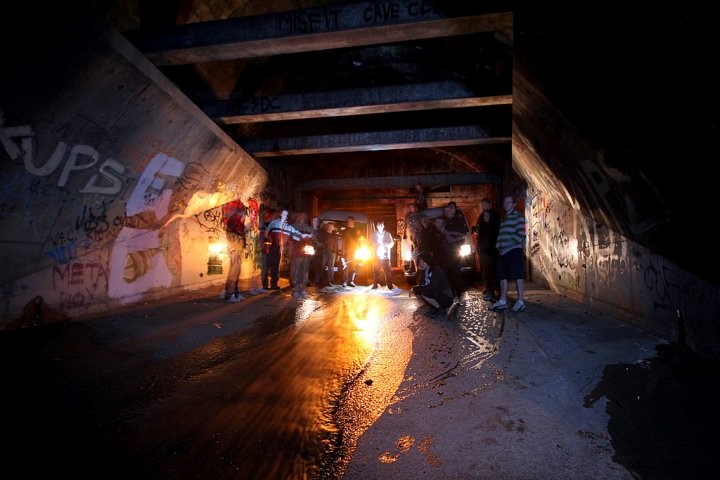 Part of the appeal of urban exploration comes through finding a new environment with which to share "peak" experiences with a community of like-minded others. These experiences operate at opposite ends of the spectrum, and are forms of sensory overload or deprivation. Escaping the overly surveilled and controlled city in itself can be an exciting experience, but witnessing the city from the top of a thirty story building at night, with nothing between yourself and the stars is exhilarating. Similarly, the experience of entering an underground tunnel, and switching off every torch provides a kind of darkness not imaginable in any other location. Within the drain, without light, it is possible to reach heightened states of creativity.[15]

"...in most parts of the city it's easy to forget that the past ever happened..."[16] "Hike far enough and you'll find yesterday; it's sitting at the end of the street or on the other side of that mountain range - And tomorrow is right next to it. Time is a landscape."[17]

One explorer told me that he would never check out a new building site while exploring because "there's no history behind it." Urban explorers are particularly interested in sites that contain historical aspects, but these are different to the kind of history found in books or museums.

In "Assaying history: Creating Temporal Junctions through Urban Exploration" Bradley Garrett describes urban exploration as an activity that gives practitioners new ways of experiencing the past.[18] He suggests that conventional historical tours of the city are sanitised, homogenised, "packaged" experiences that present history as an "artefact" rather than lived experience. These sanitised historical packages ignore the darker sides of the past, recreating an unrealistic and "Disneyfied" tourist attraction.[19] He explains that urban explorers want to be a part of the construction of history, not just passive consumers of it. "...many people... are looking for more than a 'passive past constructed through a scripted narrative.'" Garrett asserts.[20] "As space becomes increasingly codified, especially in terms that ensure a profitable 'heritage market', people seek alternative ways to locate memorial thickness, experiences devoid of the need to empirically quantify, rationalise, or sell narratives to the passing cultural history tourist."[21] Through urban exploration, practitioners produce that interactive history.

Part of the enjoyment in the re-creation of history for urban explorers is to explore places which have not been abandoned for very long and/or still contain the everyday objects of their past use.[22] These unexpected objects bring to life the stories of the people who have utilised the spaces in the (often not so distant) past. As Paiva states, in these spaces "you can feel the echoes of former human habitation".[23] These are the untold stories of those who will never make it into the history books - the "unimportant, illiterate, marginalised".[24]

Garrett explains that the urbex project is a postmodern one, because it rejects grand narratives of history and opens up spaces for maginalised voices: "The postmodern origins of the contemporary urban exploration movement are apparent in the rejection of a singular grand narrative, but also in its playful participation in history, in its willingness to interrogate its own becoming" he writes.[25] 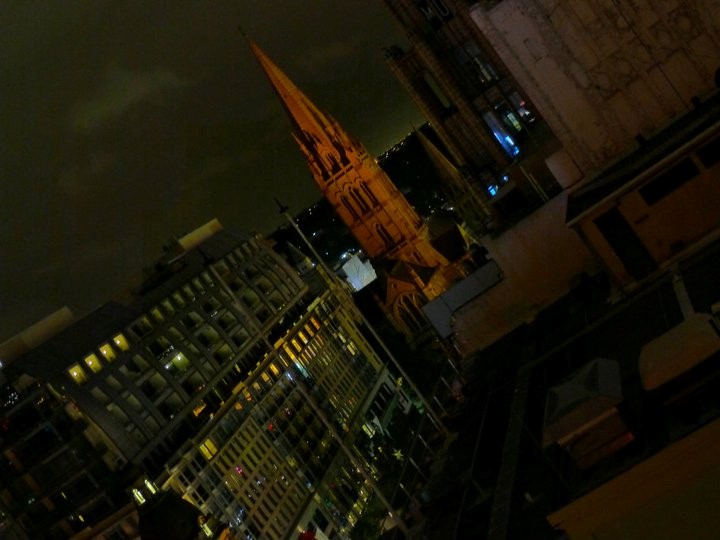 Not long after my first encounter with the spaces below the city, I went on an adventure to the top of one of the highest buildings in Melbourne. Someone knew how to trip the roller door, and once in, the elevator was surprisingly functional. What had once been glossy corporate suites had fallen into a state of disrepair: peeling paint and fraying carpet. The roof of the building, which would have only ever been home to pigeons and maintenance workers, now held a cluster of excited explorers, marvelling at the view like adventurers on a mountain top. I had been bitten by a bug; Melbourne was my adventure playground.

[2] Mike Presdee, Cultural Criminology and the Carnival of Crime (Routledge, 2000).

[3] Erving Goffman, Behaviour in Public Places: Notes on the Social Organisation of Gatherings (The Free Press, 1963).

[4] A series of popular 1980s game books where the reader is the main protagonist and can direct the outcomes of the book - with up to 40 different endings. The books were originally created by Edward Packard.

[9] Jason H Prior and Carole M Cusack (2012) "Identity and Ruins: Personal Integration and Disintegration Understood Through a Touristic Lens" Literature and Aesthetics 22(1) June pp. 156-170 at p157

[15] Nigel Spivey has theorised that the early rock paintings were produced as a result of the sensory deprivation that early humans experienced within caves. Deprivation can induce hallucinations and Spivey theorises that rock paintings may be an attempt to draw these hallucinations on the walls of the caves that induced them. See Nigel Spivey How Art Made the World: A Journey to the Origins of Art (BBC Books, 2005). To see how sensory deprivation produces an hallucinatory experience, view the BBC documentary "Total Isolation: Sensory Deprivation Experiment" online at Videosift.