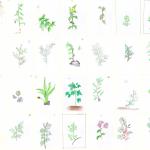 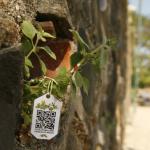 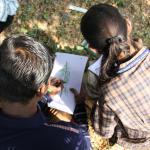 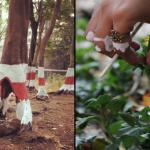 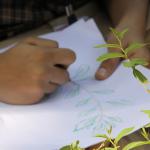 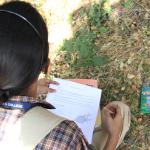 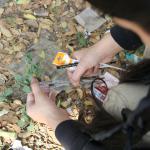 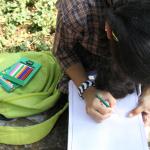 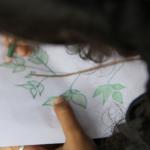 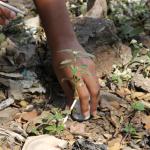 CENSUS OF WEEDS: THANE, INDIA -- 2014. This census was created for the Upvan Arts Festival, with support from the Foundation of Contemporary Artbs Emergency Grant. During this workshop, students of Thane conducted a census of weeds near Upvan Lake, inspired by the tree census performed by the local government.

This census involved drawing and taking measurements, which are posted to a project website [1]. Tags with QR codes leading to the site were tied to the weeds. The stalks of the weeds were painted to mimic the identifying stripes on the censused trees.

Thane City has carved itself out of the forest at a rapid pace. Although developed areas have replaced many wilderness areas, there are still wild elements of nature in the city, growing abundantly in sidewalk cracks and unused spaces. This project is about paying close attention to the whole ecosystem, even the most humble and overlooked elements, and celebrating their collective persistence.

As Gary Snyder asks in his book The Practice of the Wild, bWhere do we start to resolve the dichotomy of the civilized and uncivilized wild?" [2]

"Wilderness may temporarily dwindle, but wildness wonbt go away. A ghost wilderness hovers around the entire planet: the millions of tiny seeds of the original vegetation are hiding in the mud on the foot of an arctic tern, in the dry desert sands, or in the wind.

"The term 'culture', in its meaning of a bdeliberately maintained aesthetic and intellectual life" and in its other meaning of "the totality of socially transmitted behavior patterns" is never far from a biological root meaning as in "yogurt culture" - a nourishing habitat. Civilization is permeable, and could be as inhabited as the wild is.

ANNE PERCOCO: Born in Boston in 1982. Lives and works in Jersey City. http://www.annepercoco.com/cv.html